The recent Black Lives Matter protests in response to police violence have resurfaced conversations about anti-blackness in the workplace. What do Black women responding to the latest Race to Lead survey have to say about their experiences in nonprofits?

The Building Movement Project’s Race to Lead series investigates why there are so few leaders of color in the nonprofit sector and documents the challenges people of color face as they reach for and attain senior leadership roles in nonprofit organizations. The Race to Lead: Women of Color in the Nonprofit Sector report explored the experiences of women of color who took the first 2016 Race to Lead survey. In 2019, the Building Movement Project conducted an updated national survey with new questions about the sector, including experiences with discrimination; workplace dynamics; and compensation.

Black Women in the Race to Lead Sample

The most recent Race to Lead survey received over 5,200 responses from nonprofit staff around the country. Black women were 12% (618 respondents) of the sample. Somewhat more Black women were Millennials or Generation Z (41%) than Generation X (39%), and 19% were Baby Boomers or older leaders (19%). Most Black women respondents (90%) were children of U.S. born parents. In addition, 7% were children of immigrants, and 3% were immigrants themselves. Fourteen percent of Black women identified as LGBTQ. In a new survey question, 8% of Black women said they had at least one disability (including 4% noting mental health, 3% mobility, 2% learning, 2% sensory, and 1% with another type including chronic illness).

As with the 2016 survey, Black women completing the survey were highly experienced (with an average of 13 years in the sector) and educated (58% had at least a Master’s degree and 34% a Bachelor’s degree). Most commonly, Black women respondents in 2019 were program or line staff (25%), followed by middle management (19%), senior directors (19%), Executive Director/CEOs (19%), and administrative support (5%).

Impact of Race and Gender on Career Advancement

Both Race to Lead surveys asked respondents how various aspects of their identities have impacted career advancement. As the Women of Color report showed, Black women were the most likely—out of other groups of women of color and men of color—to say race and/or gender had a negative impact on their career advancement and more Black women said so in the 2019 survey (59%) than in 2016 (48%).

The survey allowed participants who said their identity had negatively impacted their career advancement to provide write-in responses. The themes identified for Black women in the Women of Color report were evident once again in the 2019 survey. These included being confronted with stereotypes and discriminatory comments on the basis of race and/or gender, being passed over for new jobs and/or overlooked for promotions, and experiencing inequitable salaries.

As described in the original Women of Color report, many Black women wrote about being confronted with overt and less obvious forms of discrimination, including stereotypes and demeaning comments. One Black woman shared, “Being a black woman, you’re faced with racism and misogyny on the job.” These encounters Black women wrote about included being assumed to be someone’s assistant when they were in fact the leader of an initiative and being questioned about their work. For example, a respondent said she has “been belittled and had my numbers questioned in meetings in front of everyone …. There’s never an apology just an ‘ah, okay, I see’ response. I’ve had others in management go behind my back to my boss and question my reports only for those same individuals to be proven wrong. I’ve dealt w/ racist and inappropriate/unprofessional and womanizing comments directed towards myself and others.”

The Race to Lead survey included new questions related to workplace experiences. Respondents were asked if they face discrimination or harassing experiences in their nonprofits and Black women were most likely to say this was often or always the case (10%), followed by Black men (8%), other women of color (7%), white women (4%), and other men of color (3%). In response to the statement “I would be happy if I worked at this organization three years from now,” Black women had the lowest average rating—6.1 out of 10 (compared to the overall average of 7.0). In addition, Black women were among those with the lowest average rating on whether they feel like they have a voice in their organizations (7.0 out of 10, compared to an average of 7.6).

Passed over and overlooked

As in the original Race to Lead survey, another common theme among Black women sharing negative nonprofit experiences related to race and gender was being passed over for new jobs and/or overlooked for promotions. For example, one Black woman with five years of experience shared she was hired for a junior role while two white women—one without nonprofit experience and the other without experience in the city—were hired as managers and “given the salaries that go along with it.” Black women also described the notable absence of diversity at top leadership levels.

The Women of Color report revealed that the most common write-in theme related to the negative impact of identity on careers among women of color—including Black women—was receiving an inequitable salary. As such, the newest Race to Lead survey included a question on how often this is the case. More than a third of Black women (34%) said they often or always are paid less than peers for similar work, followed by 31% of other women of color, 24% of Black men, 22% of other men of color, 22% of white women, and 15% of white men.

They 2019 survey also asked participants about compensation. Black women and Black men (38% for both) were the least likely to have received a cost of living raise at their current job (compared to 48% percent of the total sample). Black women (36%) were less likely than white women (42%), Black men (46%), and white men (49%) to have received a performance-based raise.

Dealing with Discrimination in the Nonprofit Workplace

Another new Race to Lead survey question asked respondents how they dealt with discrimination in the workplace. These encounters were with colleagues, supervisors, and Board members, and Black women’s responses fell into direct and indirect approaches. In the direct approach, Black women were often vocal, calling out the discrimination and speaking up about the circumstances they faced. Black women also tended to complain to someone with power—supervisors, human resources, the executive director, or Board members. Of the respondents who volunteered the outcomes of their complaints, far too many said nothing was done, they faced negative repercussions, or results were mixed. For example, one Black woman shared, “the one time I took the leap and leveraged a formal complaint against a board member, I was pushed out of my job.” Just one Black woman described an unequivocally favorable outcome, sharing, “I think that if I had not had the courage to stand up for myself, and to call out the discriminatory and harassing behavior for what it was, the board might never have taken the time or made the effort to look at or accept the problems that had long needed to be addressed.”

Black women who were targets of discriminatory behaviors typically did not directly challenge the perpetrators or file complaints, opting instead to not say anything and simply focus on the work. Some Black women expressed hesitation to speak up because they risked a negative reaction, including losing their livelihoods. For instance, one Black woman shared, “I have children to provide for so I just sweep it under the rug so that I can continue to work and take care of my family.”

Other black women addressed discrimination by working hard, trying to prove their qualifications or worth. Another common response was quitting —leaving their jobs and not turning back. One Black woman observed that the nonprofit sector isn’t much different than her for-profit experience when it comes to race and gender and she handles discrimination in much the same way, “I acknowledge the racist and/or sexist situation and try to find my way around it.  If I can’t find my way around it, I make plans to leave.”

Nonprofits failing to deal with discrimination of Black women not only risk losing talent, but are not living up to their commitment to equity. We can learn how to make the sector more supportive of Black women directly from the survey findings.

Listen To and Value Black Women.  Black women were among the least likely to feel they have a voice in their organizations. Having a voice is associated with Black women’s interest in staying at their organizations in three years. Many organizations seek answers from experts on how to deal with equity but fail to ask their own employees what they want and need. Organizations also have to be ready to take feedback from Black women seriously and not punish them for sharing something unfavorable.

Provide Support and Connections.  Black women who reported positive experiences working in the sector shared instances of being mentored and groomed for opportunities for advancement from other Black women or people of another race and/or gender. One Executive Director/CEO said that board members who “look like” her have been the most supportive and declared, “representation matters!” Another Executive Director, wrote, “I had a [white man] boss who was a sponsor and is still a mentor, who actively and intentionally sought to advance people of color within the leadership ranks of our division and agency. He gave raises when he could to bring equity to our salary and often spoke of using his role to help us break the glass ceilings.”

Despite the handful of positive comments, Black women were among the least likely to say they had received a mentor on the job (43%) and among the most likely to say they often or always lacked social capital and networks (30%). Many Black women said they need more external (44%) and internal mentors (35%), as well as other supports like coaching/executive coaching (60%). Nonprofits looking to support Black women should ask them what they need and ensure supports are available.

Develop and Enforce Policies.  Most of the Black women who wrote about their attempts to address discrimination did not share positive outcomes. Black women rated their leadership’s commitment to diversity, equity, and inclusion (DEI) on average 6.3 out of 10 (compared to 6.8 across all respondents). Asked if their organizations have policies and procedures in place to ensure a diverse, equitable, and inclusive workplace, Black women had an average rating of 6.1 out of 10 (compared to 6.7 across all respondents). Analysis of the data reveals that the more Black women perceive leadership commitment to DEI, the more Black women would be happy to remain in their organizations in the near future. Organizations committed to DEI efforts must develop, examine, and/or change organizational policies to reflect a commitment to equity, including reviewing recruitment (for both the Board of Directors and staff), hiring, compensation, and promotional practices. Organizations also must take action and ensure consequences when Black women report instances of discrimination.

Fund More Black Women Leaders. The 2019 survey asked respondents to rate five strategies for increasing the diversity of top-level nonprofit leaders on a scale of potential effectiveness from 1 (not effective at all) to 10 (extremely effective). One of the most popular strategies for Black women was “Philanthropy increasing funding for people of color-led organizations (an average of 8.6 out of 10 compared to 8.1 for the entire sample).” As noted in the original Women of Color report, very little foundation funding goes to support women of color leaders. A report by Echoing Green and the Bridgespan Group found that organizations led by Black women are especially underfunded. Black women who reach positions of power are attuned to communities and need the support to build thriving organizations. As an Executive Director shared, “I feel that I am well positioned to advocate for changes that affect people who look like me because I can relate.… I now have power and authority to make change happen, particularly for people of color. I feel a part of a larger community that is working for change that none of us can achieve alone.” 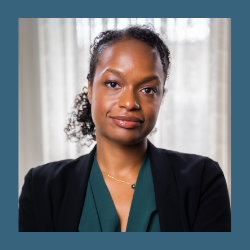