It wasn’t by chance that Sean and I became co-directors, but it was good luck. It didn’t take long to see how two heads are better than one (thanks Joni Mitchell) and that having a partner in the work upped our game.  But it also brought a reaction from others that I hadn’t expected. I should have known. After all, I work on generational shifts in social change leadership. Still, I was surprised as more and more people would say, “how great that you have a co-director,” and then ask, “and when are you leaving?”

Our very small staff and Project Team of advisors talked about who to hire for several months before Sean joined the staff. We wanted a person who would extend our capacity and bring in their own set of interests and ideas. We talked about bringing someone in that would reflect our values, including our belief in sharing power between generations and paying close attention to issues of race. A co-director, if we could find one, seemed like a good solution. And it has basically worked, at least in the first ten months, as we increased our production, added capacity, and shared responsibility.

But bringing on a co-director, instead of hiring a “senior” staffer, immediately created a reaction among my peers. They all assumed this was my first step in moving to the next phase of work and life. Why wouldn’t they? I turned sixty, the Building Movement Project is now over ten years old and I am the founding director. And this mentality was reflected all in our findings from the survey and interviews we had done with long-term nonprofit leaders.  It all made sense – but not to me.

Why would I leave as our capacity and ability to think differently about the future is just beginning? It’s great having two strong leaders in the organization and I wonder why so few organizations embrace a co-director model. I hear myself react in the same way I have heard other older leaders react. “I am making no plans to leave.” “I can’t retire.” “I love what I do.” “Why would I go now?” And it is all true. But now I am sharing the leadership with someone who is smart and accomplished – and he has many more years ahead of him to build his work life.

If I am lucky, I also have years ahead of me, but not as many.  I am in a different phase of life and truthfully – though I have talked to hundreds of long-term nonprofit leaders – I am just not sure what it means for me now or in five years or in ten. What I do know is that the workplace is changing – and we are feeling our way into new roles and new ways of (co-)operating.

But in the meantime, I think of myself as very lucky. To have a partner in the work is a real joy. Why didn’t I do it sooner?

Webinar Recap: Women of Color in the Nonprofit Sector 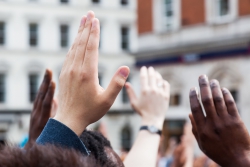 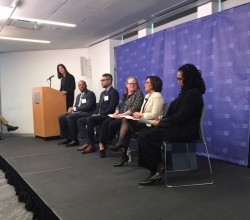 2 thoughts on “Co-Directorship – What Does it Mean?”