Recently, I was in Detroit for a community summit organized by our partners at the Detroit People’s Platform and led a workshop on coalitions and alliances. Since the power imbalances between Detroit’s community members and the city’s corporate and elected leaders are so big, local groups turn to collaboration as a strategy for building power. But there can be a lot of conflict on the path to shared power. As I was designing the workshop I reflected on what we’ve learned and read about how groups manage the tensions that can come up between coalition partners.

At BMP, we do a lot of interviews about what it takes for organizations to collaborate – especially across issues. Over the last two years, after listening to leaders in the reproductive justice, economic justice and LGBTQ movements, we started to notice a few distinct approaches to collaboration. Some groups take a “transactional” stance and focus on winning specific changes in the short-term by figuring out what each partner can bring to the table to move a shared target or policy. Other groups come to cross-movement work with a “transformational” orientation that is about shifting power over the long-term. In the middle, between those two poles, there’s a “collaborative” approach of aligning groups through a strategy of integrating the issues, goals and missions of the partners.

We’re still working on fleshing out this framework, but has resonated with organizers and advocates when we’ve presented the three approaches – transactional, collaborative and transformational. The interviews and discussions about the framework show that groups often use different approaches with different partners and in different circumstances.

While every approach has both pros and cons, some people feel that they are not valued equally in this current political moment.

At a meeting with leaders involved in the campaigns similar to those we wrote about in the “Recognizing All Families to Expand Our Movements” report, one person said “There is this idea that ‘transactional’ is icky, but ‘transformational’ is great” and then asked “How do we defend transactional approaches?” It was a good question for me to reflect on. Our purpose in laying out the framework was to help groups be clearer about their own orientation to collaboration and have a language to discuss their approach with partner organizations.

The point isn’t for all groups to take a transformational approach to partnership because if we did, we would not win the kinds of incremental changes that are needed right now to check the regressive and oppressive use of government and corporate power that dominates. At the same time, if everyone sees working across issues as only “transactional” , we won’t have a vision of where we’re headed. But talking about and bridging these different approaches can be difficult.

That is why I’ve been thinking a lot about an article by Professors Thomas Beamish and Amy Luebbers titled “Alliance Building across Social Movements: Bridging Difference in a Peace and Justice Coalition.” In the article, Beamish and Luebbers provide a case-study of a Massachusetts coalition of groups from both the environmental justice movement and the peace and anti-weapons proliferation movement. They examine how the coalition successfully collaborated despite differences in race, class, gender, etc., and describe “a cross-movement bridging process” that made it possible for groups from these two different movements to resolve tensions, maintain their collaboration, and win real change.

The four parts of the bridging process that Beamish and Luebbers identified  (1) cause affirmation, (2) strategic deployment, (3) exclusion, and (4) co-development of cross-movement commitments – help sustain a collaboration between groups with different approaches and from different movements. Most of the elements are logical and obvious, but I appreciate when research challenges me. The provocative insight from Beamish and Luebbers was  including “exclusion” as part of the bridging process. They explained that “several participants were expelled or marginalized for violating or appearing to violate the terms initially affirmed by the alliance.” Beamish and Luebbers showed how eliminating bad actors helps a collaboration re-affirm the commitment of the groups that remain … both their commitment to each other and to the alliance itself.

This idea of “exclusion” seems easier to apply to a transactional approach, where it is clear from the outset what each partner is supposed to deliver for the collaboration in the short-term. I wonder how groups with a transformational approach would view that element of the bridging process. It can be harder to ask a partner organization to leave an alliance when groups are making a long-term commitment to work together on goals that are as big as changing systems that maintain inequality and injustice.

Both our transactional to transformational framework and Beamish and Luebbers article help show that members of alliances have to openly discuss the biases they bring to the alliance and “mutual benefit” that they are getting from the collaboration. Sometimes these conversations with partner organizations are difficult. But it is worth putting energy into maintaining alliances between groups that hold contrasting theories of change, come from different movement cultures and have distinct issue priorities. 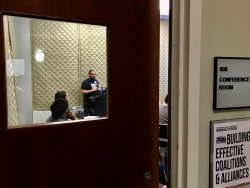