While issues that movements are built around are not invisible to those living with the effects, this stage is meant for raising general awareness about the problem.

Relationship Building
This is when different groups that are working on the same issue begin to work together.  Often social movements fall apart at this stage because groups fail to reach enough consensus on ideology or action in order to come together under the unified front that is often crucial for success.

Infrastructure
When groups begin to create formal and informal, but stable, networks that help people engage in their communities; facilitate communication and capacity to get the word out and coordinate messages.

Catalyst
With well-known social movements, there is usually one defining moment that comes to mind when we think about them.  This is usually the “catalyst”- the event that serves as a flashpoint to mobilize the masses around the issue. Sometimes the catalyst is planned by the group itself, but other times mobilization occurs in response to an action inflicted against members of the movement.

Sustained Action
This depends on steps 1-4 already having been established.  When there is true public awareness about the issue, groups have united under a common front and built a stable infrastructure for communication, and there has been a mobilizing event that has led to mass mobilization, social movements can truly have potential for making change. 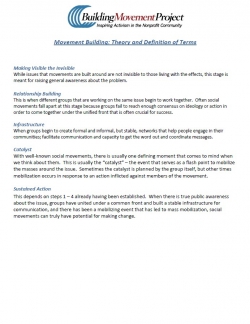