This monograph reports on the findings of a study conducted by the Building Movement Project on generational differences in leadership in small- and mid-sized social change organizations. The monograph also details follow-up sessions to discuss the study’s findings with young leaders ages 25-40 years old. In 2002, the Building Movement Project conducted in-depth interviews with directors and staff in 16 social change organizations to explore differences and similarities between older and younger people working in service, advocacy, and organizing groups. We asked questions about their current jobs and organizations, the motivations and challenges surrounding their work, and their views of leadership.

The study’s results tell a more nuanced story than is often found in the popular literature. We learned that younger directors and staff were dedicated and committed to social change and to their organizations. We heard how the movements of the 1960s and 1970s catapulted older leaders into nonprofit organizations where they dedicated their lives. We learned that younger leaders with a more contemporary frame of reference often felt invisible or undervalued by older leaders. We were moved by the conflict that young staff and directors felt as they struggled with how to stay in their organizations and make a full commitment to their family and friends. And we saw how much all those we interviewed, young and old, took pleasure from being able to make real changes in their constituents’ lives.

To confirm the results, we took the study on the road in 2004 holding nine Generational Leadership Listening Sessions in nine U.S. cities. The sessions were held with young leaders ages 25-40 in professional, nonprofit positions, and members of Generation X, who talked about the study and their own experience working in a wide range of nonprofit groups broadly focused on social change. Some of the comments and broader findings from these sessions are integrated in sidebar sections called “The Next Generation Responds.”

We hope this report will provide a frame for discussing generational change in leadership in nonprofits and social change groups in the United States.  The Civil Rights generation —the Baby Boomers—dominated the leadership and direction of progressive change in the latter half of the 20th Century. Now as we make our way into the next century, building power and change for the future, we need to look at the new generation of leaders who are poised to shape and drive this work. 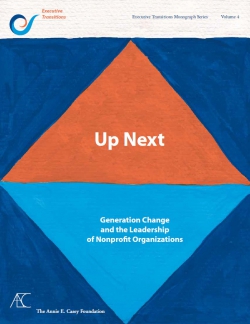