The Respect ABQ Women campaign sent shock waves through the reproductive rights community with its resounding defeat of a ballot initiative banning late-term abortion in Albuquerque. When anti-abortion groups filed their petitions in early July 2013, polls indicated that the ban would easily pass. Yet by the vote in November, a local Coalition – with national support – was able to change a slam-dunk for anti-abortion proponents into a win for those who believe women and families have the right to make their own reproductive decisions.

New Mexico has a long history of working to protect reproductive freedom, including access to family planning and abortion. The success of fighting legislative attempts to ban late-term abortion may have been one reason for the introduction of the ballot initiative in Albuquerque. New Mexico is one of nine states that allows for abortion later in pregnancy. According to the people we interviewed, Bud and Tara Shaver moved to Albuquerque confident from anti-abortion wins in Kansas, and started Project Defending Life with the goal of ending late-term abortions in New Mexico. When their initial attempts to pass legislation failed, they turned their attention to a ballot initiative in Albuquerque. They seemed confident of a victory in this “majority minority” city, where 47% of the population is Hispanic. In September 2013, two months before the vote, the Albuquerque Journal reported on a poll that showed 54% of all voters approved the ban and 39% opposed. The support for the ban was even higher among Hispanics, with 57% supporting the ban (33% opposed) including those who were registered Democrats. It is certainly impressive that the Respect ABQ Women campaign was able to turn these polling numbers around to defeat the ballot initiative. It is also noteworthy how the local leaders of the Campaign worked together and with national partners to not just win against the anti-abortion measure, but strengthen their coalition to take on future fights.

The win in New Mexico reverberated around the country. After so many defeats, it was a boost to those working on reproductive rights and justice, and many people wondered what made the Campaign such a resounding success. This paper tells one piece of the Respect ABQ Women story. It focuses on the elements that allowed a small group of five leaders – all part of the New Mexico Coalition for Choice – to stay together in an intense and challenging process in ways that resulted in a larger sense of community and possibility, and win an impressive victory.

This report focuses on five key elements of the Campaign: 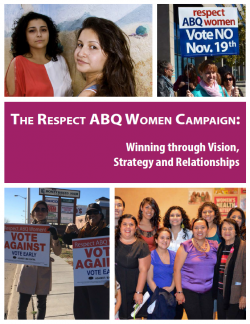