As long-term leaders in the nonprofit sector think about life after they leave their current jobs, two things become clear: They are not planning to move into traditional retirement, and they want to continue to contribute to the common good.

Many studies have anticipated a large exodus of Baby Boomers and older leaders, raising anxiety that the sector was unprepared to put in place new leadership to succeed them. With the 2008 recession, fears of a leadership deficit were replaced by concerns that aging leaders would be forced to stay in their positions while they rebuilt their savings – causing their organizations to stall and preventing younger leadership from advancing.

This report details findings from an online survey of long-term nonprofit leaders age 55 conducted in early 2012 by the Building Movement Project, Civic Ventures, and Clohesy Consulting, which tell a very different story.  Long-term nonprofit leaders looking to the future are surprisingly consistent about wanting new ways to continue meaningful work, in positions that offer more flexibility and less responsibility.  While this pull to leave their leadership positions and enter a new stage of work is accompanied by apprehension, long-term leaders are optimistic about their future. They know what they want even if they may not be sure how to get it or where they will land.

Older long-term nonprofit leaders want to continue contributing to the common good in meaningful social purpose work, in paid or volunteer roles, after they leave their current positions. They are embracing the idea of an encore stage of work for their decades after midlife.

While survey respondents expect to continue working in the social sector, they are not looking for comparable leadership positions.  Instead, they want to work in different ways where they are less in charge and have more flexibility and fewer responsibilities.

Money tops the list of personal worries when asked about leaving their leadership jobs, with health insurance a close second especially for the baby boomers in the survey. But there are other concerns as well, mostly related to their place and identity as they enter into the next stage of work and life. 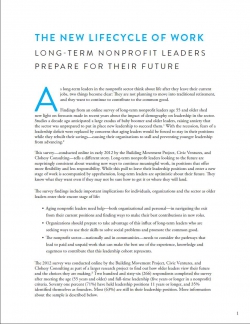