After the economic crash of 2008, policies at the federal level did little to impact the hardest hit communities or to hold banks accountable for the malfeasance that led to the recession. By 2010, big banks were posting record profits while job losses and foreclosures continued unabated. Recognizing the immense challenges to economic opportunity and well-being, some of the largest community organizing networks in the U.S. aligned around a common set of national demands and combined their grassroots efforts in order to achieve three interrelated goals:

Over several months, the collaboration grew to include four national organizing networks – the Alliance for a Just Society (AJS), National People’s Action (NPA), PICO National Network (PICO), and Right to the City (RTC)—as well as several unaffiliated organizing groups working at the local, state and regional levels. By 2011, these diverse groups settled on a common name and identity: The New Bottom Line (NBL). The organizing networks that formed NBL knew they were up against some of the country’s most powerful economic and political institutions. They also recognized that NBL was challenging a legacy of fragmentation and competition among national organizing networks that made new collaborations difficult to establish and maintain. They aimed to “advance a ‘new bottom line’ that re-instilled basic values of fairness and economic security,”  and they were remarkably successful, particularly given limited time and resources.

As the New Bottom Line, the four organizing networks (and their many allies) advanced a big vision, won significant policy changes and created lasting relationships between organizations. NBL’s sophisticated narrative and communications strategy was critical to elevating the banks as the primary culprits for the nation’s economic woes, and countering the dominant framing of the mortgage and foreclosure crisis as the fault of homeowners. The New Bottom Line’s persistent advocacy for principal reduction and public demonstrations against the banks helped stiffen the spines of the state Attorneys General, and resulted in a settlement with the banks that provided real relief for hundreds of thousands of homeowners. NBL also led and won a national campaign to replace the director of the Federal Housing Finance Agency.

The Building Movement Project (BMP) was hired by the New Bottom Line to evaluate its work and its impact. Information on the alliance was collected through a brief survey and in-depth interviews with organizational staff and leaders directly involved in NBL, as well as allies, consultants and funders of NBL’s campaigns. In addition, BMP used internal reports and documents provided by NBL and a review of relevant literature. Based on the variety of data gathered, this report describes NBL’s many successes, as well as the challenges it faced. It also suggests several lessons for coalition and movement-building efforts, based on NBL as a model and example for new kinds of alliances and partnerships between organizing groups. 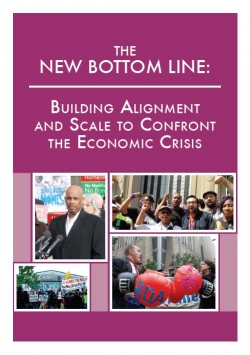