This report is the second in a series that examines different aspects of a transformational moment for the nonprofit sector, as the baby boomer cohort begin to transition out of their current leadership roles and contemplate their next stage of work and life. It focuses on the nonprofit leader’s decision to leave a long-term executive position. More specifically, the report highlights and explores the leadership in leaving as an often neglected aspect of a nonprofit leader’s role that is a key in understanding and successfully completing the exit process.

Estimates suggest that up to 75% of U.S nonprofit leaders are planning to leave their positions in the next five to ten years. With over 1 million nonprofits and philanthropic institutions, the implications and the expected turnover in leadership are enormous. Even a modest estimate would expect a half million leaders poised to leave their positions over the next fifteen years. Many of them will not only leave long-term jobs but also the organizations they founded. The long-term executive leaders in this generation, along with other older leaders and staff members, will inevitably decide their own next move. Some will stay in their current jobs long past traditional retirement age, others will leave to find new ways to be involved in an encore stage of social impact work, and a few will exit the nonprofit sector entirely.

For decades Americans have assumed that by 65 they would exit to a “golden years” stage of retirement. The findings from our first report, The New Lifecycle of Work: Long-Term Nonprofit Leaders Prepare for Their Future, reveal a different reality. Results from a survey of over 300 nonprofit leaders age 55 and older show that long-term nonprofit leaders are surprisingly consistent as they look to the future. They want new ways to continue meaningful work in positions that offer more flexibility and less responsibility.

These leaders – like their peers in other sectors – will have extra years added by the longevity revolution. With extended adulthood, the time after middle age is becoming a distinct period of life where many will work into their 70’s and beyond; this longer lifecycle will affect generations to come. Long-term nonprofit leaders are both deciding when to leave and how to begin this next stage. This report is about leaders making that decision. 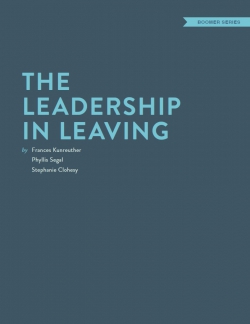