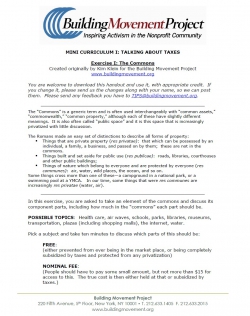 Exercise 1: The Commons
Exercise 2: A Conversation about Taxes

Introduction to the exercises
At the Building Movement Project, our work is focused on nonprofits and it is that audience I have in mind for this workshop.  I believe staff, board and volunteers in nonprofits, for the most part, do not have clear opinions about taxes, and often hold self-canceling beliefs about them.  Our lack of consensus and debate reflects our broader national lack of introspection on the subject.

Every year a consulting firm called The American Association of Fundraising Counsel publishes a report called Giving USA, which documents how much money is given by foundations, corporations and individuals and where it goes each year.  It is a very mainstream and non-partisan publication.  In the 2004 introduction, it says, “Most developed nations support health care, education, or the arts through taxation.  In the United States, we have the distinction of having almost 10% of our workforce employed in organizations that receive a significant share of their funding from voluntary gifts.”

The question is: is this a distinction to be proud of or is it a benchmark to measure against?  Do we want to join the ranks of other developed countries with a fair and equitable tax system that supports, among other things, health care, education and the arts? Or do we believe that nonprofits, funded privately, can take care of all these needs and more?  In general, there is little discussion about this and so during economic downturns, federal, state and local governments cut funding with little consequence because the public does not demand that public schools, public libraries, public pools, public hospitals or public parks and the like be funded with money taxed from the public.

We need a nationwide debate on these issues.  People do not have enough opinions about taxes. Those at the less governmental end of the spectrum tend to think that with lower taxes, people will give away more money and the lack of government funding will be mitigated by private donations.  They often feel that government is inefficient; however, there are no hard and fast party lines here.  Those who believe that taxes should pay for social services are also often critical of government waste and bureaucracy.  Those who believe that the government should pay for as little as possible often support a strong military which uses the lion’s share of tax dollars.  When issues of public policy such as gun control, reproductive rights, charter schools, prisons, or environmental protection are discussed, the lines will cross and re-cross a number of times.

The nonprofit sector is as divided as the nation on these issues, and nonprofits working on public policy and tax issues debate each other and provide the research and information for the debates carried on by politicians and commentators.  Taxpayers often see the issue very practically, if narrowly – they would usually rather pay lower taxes. They will support federal tax cuts; however, they will also vote for school bonds to improve the schools, or for parks and wilderness areas, or for bike paths, showing that they understand the role of taxes in their local communities but may not see the benefit to a large federal government.  Since the people who pay the most taxes relative to income are the middle class and our tax structure is regressive, it is hard to make the case that people should pay more taxes without also calling for an overhaul of the tax system to make it more equitable.

At the same time, it is clear that private funding cannot replace government funding.  What is required is a much clearer and constant education about the role of taxes, the way our taxes are levied and they type of taxes we pay.  For example, in states with no state income tax, but high sales tax, efforts to institute an income tax usually fail, voted down by the people it would most benefit, even though it can be shown that poor and working class people will have more money by paying income tax and decreasing sales tax.  Or, for example, in the debate about capital gains tax, Americans will generally favor lowering it (depending on your tax bracket, it is for the most part, lower than income tax) even though many of those same people will never pay capital gains tax, and would be better off if capital gains were taxed at the same rate as income tax.  Estate tax (renamed incorrectly by conservatives as the “death tax”) is the most obvious of the problems in the tax debate.  Estate tax, our nation’s oldest tax, is a redistributive tax which keeps us from becoming an aristocracy.  Only 2% of estates will pay estate tax, yet most Americans will vote to abolish it altogether. There are nonprofits whose mission is to educate people about the economy and in the places where they have worked, they have often been effective.  For example, United For a Fair Economy organized a speaking tour with Bill Gates, Sr. and Chuck Collins about estate tax. Hearing very wealthy people talk about the importance of estate tax is very inspiring and convincing and may yet keep estate tax repeal from becoming permanent.

Because of the tax benefits from giving, either from income, capital or estate, the tax debate should be of concern for fundraisers and for the sector as a whole, yet historically except for organizations specifically working on tax reform, the nonprofit sector has tended to stay out of the debate.

Unlike many Western democracies, we do not have a national consensus on the role of taxes.  It is unlikely we ever will without a much more informed debate on this issue, and a lot more education of the public.  Until then, nonprofits will lurch from administration to administration in terms of the availability of government funding.

The point of these exercises is not to convey facts and figures, convince people taxes are good, or a certain kind of tax structure is better than another kind.  It is simply to get people to practice talking.  You are welcome to use these exercises and modify them to make them more useful to your situation.  We hope you will note the Building Movement Project website (www.buildingmovement.org) on anything you download from here.  We also ask that you share your experience (good and bad) using the exercises, and also to send us any exercises you have or develop on this or any other “commons” topic.  Send any feedback to: TIPS@buildingmovement.org.