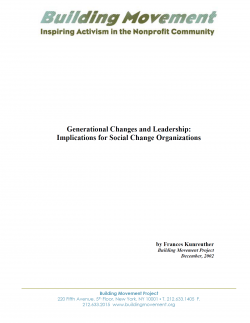 The Generational Change project was conceived as a way to investigate and understand differences between older and younger people working in progressive social change organizations in the nonprofit sector. The project is a qualitative study of thirty-seven leaders and staff in sixteen nonprofits located in Boston and New York. All of the groups selected for the project were committed to social change, that is, to transforming larger systems that they identified as the cause of problems facing their constituent populations. The people interviewed – older and younger directors and staff – were asked a series of questions that were designed both to identify whether there were differences in attitudes and assumptions between older and younger people working in social change organizations, and to uncover other issues or concerns.

The Generational Change project asked people – directly or indirectly – about these different areas to see how those working in social change organizations fit into these reported trends. The findings of the study seem to refute the notion of large generational differences. However, the responses do indicate that older and younger people working for social change have different needs. This summary will report on nine different areas we explored with those we interviewed: 1) their backgrounds; 2) their views of the work/personal life divide; 3) the things they enjoy about their work; 4) what they find challenging; 5) their reports on how decisions are made within the organization; 6) their views of leadership; 7) the type of training leaders need; 8) how they saw issues of race and gender; and 9) their thoughts about the future. We also will make recommendations on how both practitioners and researchers might proceed based on these findings.

Contrary to our initial expectations, there were not consistent and sharp differences between older and younger generations, either leaders or staff. What the project did uncover were the pathways, or lack thereof, for dedicated younger staff to become leaders in organizations, especially those run by older directors. It became clear for those groups in the study, that training for and assuming leadership of a social change organization was a difficult road for a young person to follow, even for those who had been successful. The findings also point to how the organizational context in which people worked, that is, the structure and history of the organization, has a significant affect on the way older and younger leaders and staff operate within those organizations. As a result, information such as to whom the current leader was accountable; whether the organization reflected the leader’s vision for change or a larger vision built with the board, staff and/or constituents; and the reasons funders invested in the group may all turn out to be extremely important. The findings of the study point to the need for us to understand the way these organizations operate as well as the people drawn to leading them, in order to have a significant impact on recruiting and maintaining the next generation of leaders.