As communities across the country organize around Community Benefits Agreements and consider ordinances and ballot proposals as a means to hold developers accountable, this deep dive into the CBA movement in Detroit is timely.

“In recent decades, city leaders have spent or conceded more and more public resources for ambitious projects to fulfill their economic agendas. In response, community groups across the nation have turned to CBAs to prevent such projects from benefiting new high-income residents at the expense of services and amenities for high-poverty communities that remain, often just blocks away.”

“By relying on tireless grassroots organizing and community outreach, Equitable Detroit planted seeds for a broader movement for equitable development—one that they hope will extend beyond one policy and one city. “If we are as successful as we want to be,” says Angy Webb, an Equitable Detroit member and leader of Joy Community Association, “we will be a model for everyone.””

“This report documents the national model on which Equitable Detroit is building, the inequalities that it aims to address, and the way in which the CBO can further propel the community benefits model. It details Equitable Detroit’s campaign and strategies to date and offers some lessons that its members have learned or reinforced in the process, which they will use to move forward and which community leaders in other cities may find useful in pursuing their own CBO campaigns.” 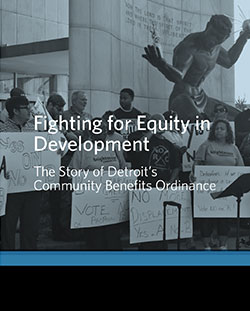