Despite racial and economic progress in the Unites States, Black communities continue to endure disproportionate levels of inequality and injustice. The status of Black workers and their ability to address the socio-economic issues faced in their communities reveals an America defaulting on its promise as the “land of opportunity.”

In an effort to address the state of Black workers in the United States, the Discount Foundation commissioned several scholars to develop the #BlackWorkersMatter report. This report highlights the economic crisis affecting black communities, shares analysis on the Black jobs crisis, and elevates the importance of investing in efforts to organize Black workers.

BMP’s Sean Thomas-Breitfeld wrote the first section of the report. In Working While Black: The State of Black Worker Organizing in the U.S.,  Sean examines the organizing landscape for Black workers, and looks at the range of worker organizing taking place in Black communities, by using interviews with twenty-nine community organizers, national experts, and foundation staff members as his primary source material. The activism flourishing under the #BlackLivesMatter banner has increased the sense of urgency and energy in community organizing around Black issues. Sean’s report underscores the need to be frank and honest about race and to recognize the unique impact of anti-Black racism, rather than hide behind “color blindness.” 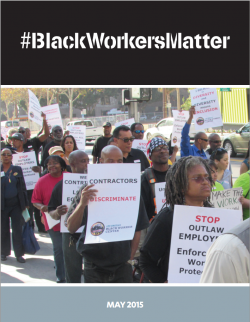