When this report was released in 2013, the LGBT movement had witnessed wins that an earlier generation would have thought impossible: from the first-ever statewide popular votes legalizing same-sex marriage to the Former President Barack Obama acknowledging LGBT rights in his inaugural address to the nation. However, as the struggle for legal equality of LGBT people in the United States continues to advance, the movement faces a series of questions about the future. How will it capitalize on the current momentum to continue to advance a broad range of issues and to influence social norms in order to make equality both a legal right and a lived reality for LGBT people? What new goals will the LGBT movement adopt? Who will be the movement’s future leaders?

At the time of this report’s release, the crossroads facing the LGBT movement reflected the tension between its current priorities and its future direction. The movement’s successes were largely the result of strategic investments in policy change to secure equal access to two of the most traditional institutions in America – the military and marriage. More than providing recognition and inclusion of lesbian, gay, and bisexual people, breaking down these institutional barriers has been an important avenue toward changing social norms. The broader public has found marriage, with its symbolic and systemic advantages, a pro-gay policy agenda they can support. However, marriage has also become so identified as the movement, especially for non-LGBT allies, that it threatens to leave out other crucial issues that would ensure full acceptance and just treatment of all LGBT people. Winning marriage equality, like other single-issue fixes to the rights of oppressed groups, could mean the sidelining of other important LGBT issues and that the movement – like reproductive rights and racial equity – may stall and become vulnerable to new backlash strategies from the opposition, all of which could rollback the hard-fought progress of today.

At the Crossroads explores how local, state, and national policy advocates and organizers see the future of the LGBT movement. The findings point to LGBT leaders’ desire to define movement-making beyond the marriage moment. The respondents in our study, many of whom work on marriage equality, are aware of the long road ahead, and there is a deep concern that the LGBT movement is not prepared to address a host of issues that prevent LGBT people from obtaining full equity and fairness. 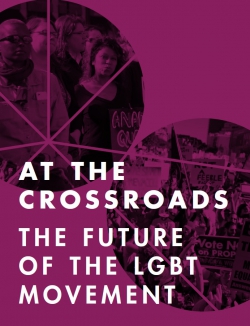