As Pride month came to a close this year, LGBTQ people were reminded that the struggle continues to have our lives and loves be valued equal to straight people. The Supreme Court ruled in favor of a Colorado baker who refused to create a wedding cake for a same sex couple. That same week, a new national survey from the Human Rights Campaign (HRC) highlighted the daily challenges that LGBTQ people face at work.

The main headline from HRC’s survey was that roughly half of LGBTQ people are closeted at their workplaces, but it was also striking that 13% of the 804 LGBTQ respondents reported that they feared being fired because their workplace was unwelcoming. In our own national survey of nonprofit workers, which included 847 people who self-identified as LGBTQ, we didn’t ask whether people were closeted at work, but did learn that 19% of LGBTQ respondents believed that their sexuality had negatively impacted their career advancement.

The HRC survey also found that roughly 20% of LGBTQ employees have stayed home from work because their workplace wasn’t accepting of their sexual identity. We also know from a survey by the Center for American Progress that 42% of LGBTQ people reported taking time off work to care for someone they aren’t related to by blood or legal ties (a significantly higher rate than the 31% of straight people). So consider how difficult it must be for an LGBTQ person taking time off work to care for their “chosen family” when they are also afraid to explain to their supervisor who they are taking care of for fear of being outed.

The sad fact is that even workers covered by sick or family leave policies often find themselves excluded, penalized or punished for not fitting into the narrow legal definitions of family that shape leave and benefit policies. While this problem affects LGBTQ people in particular, there are many other families – blended families, single-parent households, families impacted by incarceration, those caring for nonbiological children outside of legal guardianship, multigenerational and multi-national families, and more – who can fall into the hole created by policies that haven’t kept up with the growing diversity of family formations.

The limited understanding of family doesn’t just impact who we can take time off to care for, but also who can care for us when we need it. A survey by the National Asian Pacific American Women’s Forum of Asians and Asian Americans living in New York City found that “76% of respondents indicated that they would rely on their chosen family over their spouse or family of origin for caretaking and other forms of support if they had to take time off work for health-related reasons.” But if only a spouse, parent or sibling is granted the flexibility at work to provide care, then people are legally unable to rely on their preferred and most important networks when navigating an already complicated healthcare system.

While this picture may appear pretty bleak, there is good news. In the fall of 2014, advocates from more than 30 mostly national organizations met in Washington DC with the goal of forming a “brain trust” to knit together the intersecting and overlapping agendas of campaigns for LGBTQ rights and work-family leave policies. Less than four years since that initial meeting, this group of advocates, now known as the Family Justice Network has won numerous policy campaigns for inclusive paid leave protections that certainly protect LGBTQ people, but also cover many more types of loving families. Last month, Duluth, MN became the 10th jurisdiction to pass such legislation!

Our “Recognizing All Families to Expand Our Movement: Insights from the Family Justice Network” report highlights the organizing and advocacy that has led to these significant wins, lifting up key insights gained from case studies in Georgia and New Mexico. In each place, recent efforts have shown how much change is possible when people are organized around the widely-shared value of family. They also demonstrate the potential to move everyday people to get involved when issues are framed to highlight the failure of public policy to reflect and protect diverse families. Each state illustrates that progress toward changing both policy and culture begins by connecting people and building movement around progressive “family values” – that is, the value of recognizing and honoring all families.

Everyone cares for a loved one at some point in their lives. The failure of laws in the United States to both support family caregiving and recognize the rich variety of families is a major shortcoming. But, through advocacy, organizing, and culture change, that reality is shifting. Download the report for free and share it with your colleagues and peers to spread the word that change is possible.

Since its inception nearly 20 years ago, the Building Movement Project (BMP) has prioritized lifting up the cross-movement work organizations are doing to build progressive power. The success of Family Justice Network affiliates to partner across siloes, uniting efforts for economic justice, LGBTQ inclusion, paid sick time, and many other campaigns demonstrates the movement capacity of nonprofit organizations. We are proud to continue documenting and supporting these important efforts. Learn more about our other Movement Building work here.

Between Resistance and Rebuilding 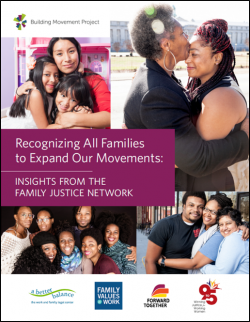