Earlier this week, the Chronicle of Philanthropy reported on an interesting phenomenon in Charlotte, North Carolina. It appears that nonprofit executives there are finally proving right the 2006 theory that a mass exodus of long-term nonprofit leaders was on the horizon, as 35 of the city’s nonprofits have changed leaders in the last year.

The sector has been talking about this Bridgespan study for years – worrying whether a leadership crisis would really come to pass and if up to one million leaders would actually transition out of their positions in the next ten years.

To date (the recent phenomenon in North Carolina notwithstanding) the sector has found that this mass exodus hasn’t really happened.  Long-term nonprofit leaders, especially those from the Baby Boom generation who are entering retirement age, simply aren’t leaving in the same numbers that early analysts had predicted.  The questions that still need to be answered are why aren’t they leaving, and what do they plan to do next?

Last summer we released a report that we hoped would begin to answer those questions.  The New Lifecycle of Work, based on a study of nonprofit executives over 55 that included 40 in-depth interviews and a national survey, offers some explanations for why these long-term nonprofit leaders weren’t leaving their top-dog positions.  Partly they were worried about personal concerns – finances, health care, and remaining relevant within the field were all cited as worries for those contemplating a transition.  Organizationally, Executive Directors worried about the financial health of the organization and picking the right successor to carry on the work.

What was most striking about our study was that although the majority of long-term nonprofit leaders don’t necessarily want to stay in their executive roles – they want to move on to something with less responsibility, more flexibility, and without the demands of major fundraising – they overwhelmingly want to keep working, whether that be in consulting roles, as interim EDs for other organizations, or interests unrelated to the nonprofit sector.  The issue is figuring out what to do next and making the jump to get there.  Most of our respondents who were looking back after the transition out of their leadership role spoke with much less anxiety about where they were headed and about the futures of the organizations they once led.

While it looks as though Charlotte might be one of the first to experience this widespread leadership turnover that we’ve been waiting almost a decade for, we’ve found that nonprofit leaders across the country are at least contemplating their next steps (even if they haven’t yet made the move to leave).  In the meantime, we can at least begin to explain what is making them stay, and where they might go after they decide to leave.

A New Report (with Tools) For Deciding on Extended Executive Transitions 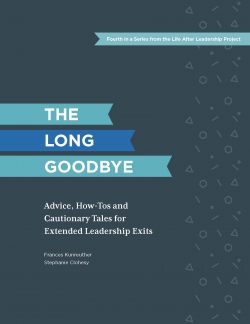 Is it a Crisis?
The Nonprofit Leadership Crisis We’ve All Been Waiting For
The Leadership in Leaving