Beloved Chicano activist, Betita Martinez, once said, “I still believe if we’re ever going to really have the power and build a movement strong enough to transform this society into one of justice with peace, a large part of that will happen as a result of different forces coming together, seeing what they have to fight for in common, and really getting out there and using everything they can — nonviolently, of course — to change this society.” Hispanic Heritage Month (September 15 – October 15) is an opportunity to celebrate the contributions of freedom fighters from the Latin American diaspora, to deepen our understanding of the multiplicity of liberatory visions housed within, and like Betita Martinez said, to fight for what we have in common until we win.

For nonprofit organizations looking for ways to engage with communities in the Latin American diaspora, whether they are communities directly centered in their work or movement allies, we offer a few entry points for deepening political education, strengthening your solidarity practice, and building bridges between movements.

Understand the Connections and Commonalities within the Diaspora

Latin American communities in the US have a multiplicity of identities and backgrounds. It is important to recognize, understand, and acknowledge these intersections and their origins. For example, with regard to the term “Latinx,” in The X in Latinx is a Wound, not a Trend, Alan Peleaz Lopez, an AfroIndigenous poet, installation and adornment artist from Oaxaca, México, reminds us: “Transgender and gender-nonconforming Latin Americans living in the U.S. have used the “X” as a reminder that their bodies are still experiencing a colonization invested in disciplining them to fit a standard gender identity, gender presentation, sexual orientation, and a particular sexual performance.” Whether you use the terms Hispanic, Latino, Latinx, or Latine, it is important to understand that the Latin American diaspora is not a monolith and that there is an ongoing discourse around why these terms do or do not resonate.

While Latin American communities in the U.S. are connected by the impact of certain systems of oppression, they may not experience them the same way based on gender identity or sexual orientation like Alan Peleaz Lopez mentioned. Classism, racism, ableism may also shift the values held based on lived experience. We build commonalities by naming the values that our lived experiences have led us to hold. For example, organizations like Mijente and Familia: Trans Queer Liberation Movement share a vision of dismantling the systems of oppression we live under to radically transform our world for the better. They do so by naming racial, economic, gender, climate justice, and trans and queer liberation as central to their vision of liberation. As nonprofit leaders, we should ask ourselves: What values do I hold central in my vision of justice, equity, liberation, and solidarity? How can I build commonalities with members of the Latin American diaspora based on a shared vision?

Center the Leadership of Black and Indigenous Members of the Diaspora

One of the reasons why the term “Hispanic” is so heavily contested as an umbrella term for Spanish-speaking people is because it glosses over the genocide and oppression of indigenous communities, culture, and language, which is part of the legacy of settler-colonialism. Modern day manifestations include the forced displacement of indigenous people by their home countries and the violence experienced in their migration to the United States, including the lack of language access services provided to people who do not speak Spanish by various government agencies.

By deepening our understanding of the diaspora, we learn why it is so vital to uplift indigeneity. For example, Comunidades Indígenas en Liderazgo (CIELO) created the Undocu-Indigenous fund “to specifically address the challenges and allocate resources to Indigenous undocumented communities in Los Angeles to help with their well-being.” Partnering with local organizations like CIELO also challenges us to remember that Spanish is not the only language spoken by the diaspora, nor is speaking Spanish a requirement to holding that identity. When engaging with members of the diaspora, we should pause and ask ourselves: How am I upholding language access and language justice in the spaces I create? And, immigration advocates could ensure that their advocacy on immigrant rights is mindful of the displacement of indigenous people, both in the U.S. and abroad.

In addition to settler colonialism, the enslavement of Black people also created a legacy of white supremacy experienced by Black members of the Latin American diaspora. Afro-Latinx advocates like Alan Peleaz Lopez, Alicia Sanchez-Gill, Janvieve Williams Comrie, and Rose Berry remind us of the erasure of Afro-Latinx people in immigration narratives and in representation in media, among other spaces. When celebrating Hispanic Heritage Month and beyond, nonprofit organizations can correct the narrative by ensuring representation and real inclusion and investment in communities within the Latin American diaspora that experience the impact of multiple systems of oppression. To begin this work, we should ask ourselves: How can I engage with communities on all of the issues that may impact them by removing silos between different policy areas? How can the direct service programs I run ensure that Black members of the Latin-American diaspora feel seen and supported?

“Let us come together and move forward with hope as we defend and care for the Earth and its spirits,” Honduran indigenous and environmental rights activist Berta Carceres implored just one year before she was murdered for her heroic defense of her people and the land. As social change agents, regardless of what issues we work on, we have so much to gain from building relationships between communities and across movements. While a crisis can be the catalyst that forces us to recognize the connections between our struggles, it is ongoing relationship building that gives us the time to expand and strategize based on our commonalities. When we do that, we develop trust that our interests will be respected and understood by someone else. We build practices that allow us to work in alignment regardless of whether it’s Hispanic Heritage Month or not.

Teaching Beyond 9/11: Lessons for Solidarity and Justice

New on the Solidarity Is This Podcast: Centering and Uplifting Asian American Communities 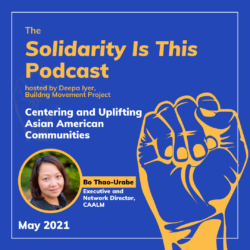 Between Resistance and Rebuilding