It would be an understatement to say that the past few months have been uncomfortable. The national election was downright ugly, and it exposed just how naïve those pundits were who “dared ask whether the United States had finally begun to heal its divisions over race” after President Obama was elected. The resistance that has sprung up in response to the new administration has also been fraught—apparent, most notably, in the tensions over race and feminism that were sparked in the lead-up to the Women’s March on Washington, in January. The critiques and dissent may have hurt some feelings but the march was an undeniable success, drawing historic crowds to the nation’s capital and highlighting the leadership of the four cochairwomen—one Black, one Latina, one Muslim and Arab American, and one white. Nonprofit leaders should get ready for additional uncomfortable conversations over the next years and accept that conflict will be necessary for progress.

The diverse leadership of the Women’s March was so notable because studies and surveys repeatedly show that people of color are underrepresented in CEO[1] and board[2] roles in the nonprofit sector. In preparation to launch our own national survey on nonprofits, leadership, and race last year, my codirector, Frances Kunreuther, and I conducted more than thirty interviews with other experts in the nonprofit sector about what we’re calling the “nonprofit racial leadership gap.” The basic question we asked is, “Why haven’t we moved the dial on diversity?” The answers to that question varied widely and are far from conclusive, but without fail the most interesting conversations were with people who had personal experiences to get off their chests. Similarly, among the more than four thousand survey responses from nonprofit staff across the country, some of the richest data came from the hundreds of individuals who answered an open-ended question about how their race/ethnicity had negatively impacted their career advancement. Knowing that discrimination still exists is one thing, but listening to and reading personal stories reveals that racial dynamics are as tense in our organizations as they are in our national politics.

This article comes from the spring 2017 edition of the Nonprofit Quarterly, which addresses ways of thinking differently about a variety of issues affecting the sector. It is part of the ongoing Equity, Diversity, and Inclusion (EDI) Project.

IMAGE: “SEARCHING FOR WHAT WE DON’T HAVE” BY SHANMUKHA INKAS / WWW.SAATCHIART.COM/INKAS; INKASART.BLOGSPOT.IN 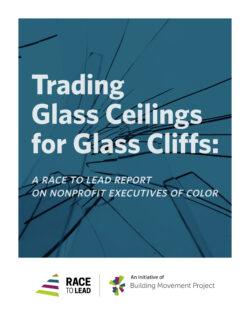