Move The Money is a set of resources geared towards grantmaking institutions interested in expanding and deepening their support of organizations, networks, and leaders working in social change movements. The resources were developed through a curated series of dialogues between leaders and grantmakers, the Movement Leadership Learning Lab for funders, and other BMP work focused on networks that catalyze social movements. BMP has also learned from other ongoing efforts to move philanthropy to invest in people-powered systemic change.

Move The Money consists of four videos and accompanying discussion guides with reflection questions that address the following themes:

During the launch webinar, we heard about the needs of movement leaders and the role that philanthropy can play to address them. Key takeaways from our conversation include:

Visit the #MoveTheMoney landing page to access all the materials, learn about upcoming opportunities, and connect with BMP about a #MoveTheMoney presentation or workshop for your organization. Get started here: https://buildingmovement.org/move-the-money/ 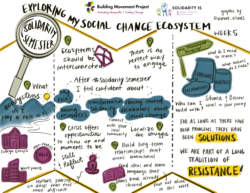 Spaciousness and Solidarity in the Time of a Pandemic

A Message from Building Movement Project: Sustaining Non-Profits in a Time of Crisis