Working at the Intersections: LGBTQ Nonprofit Staff and the Racial Leadership Gap Executive Summary can be found at http://racetolead.org/lgbtq/!

The report builds on data from BMP’s Nonprofits, Leadership, and Race Survey, conducted with more than 4,000 respondents across the nonprofit sector. This report, the second in the Race to Lead series, analyzes the experiences of the 20% of survey respondents who identified as Lesbian, Gay, Bisexual, Transgender, or Queer (LGBTQ).

Some key findings include:

This Executive Summary gives a sampling of the data we collected, major findings, and our resulting recommendations. For a deeper analysis, visit http://racetolead.org/lgbtq. 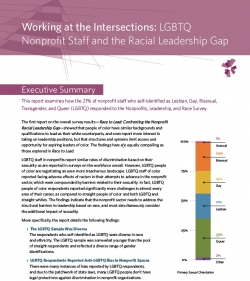