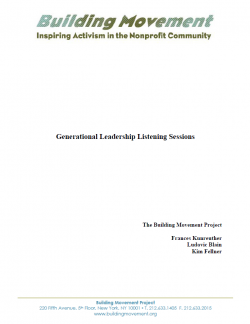 Who will lead nonprofit organizations dedicated to progressive social change in the difficult decade ahead – and what resources and skills will they need to meet the challenge?  In 2004, the Building Movement Project convened Generational Leadership Listening Sessions (GLLS) with young nonprofit leaders in nine cities to explore these critical questions in the context of leadership transition from the Baby Boomers to a new generation.

The Listening Sessions followed up on a 2002 Generational Changes and Leadership Study which examined the differences between Baby Boomer and Gen X/Y leaders, and how these factors play out in nonprofits that consider social change part of their mission.  The 122 GLLS participants, mostly leaders of color between the ages of 25 and 40, were gleaned from a mix of sources that included the Building Movement staff and project team, sponsoring foundations, and referrals from colleagues around the country.  They came from nonprofit organizations large and small, spanning service providers and community organizing, as well as consultants, cultural groups and academic institutions.

There was a startling level of consistency across location in the issues and concerns young leaders identified as most pressing.  These included:

Difficulty younger leaders had in establishing their credibility

Tensions between the mission, and organizational process and culture

Complicated, uneasy dynamics around race, gender and class privilege within and across social change groups

Squeeze between baby boomer leaders who are not leaving their positions and a new, even younger generation coming into the pipeline

Struggles to balance the demands of work with personal needs

Reluctance among many younger leaders to assume directorships

This report probes these issues as they emerged in the gatherings, building on the insights and reflections of the participants. Together, they mirror the experiences of a younger generation of social change practitioners in a field dominated by leaders of the Baby Boom generation – their present-day realities, their personal aspirations and their vision for a social justice movement in a changing and challenging environment.
(© 2005)