In reproductive justice circles, the victory of the Respect ABQ Women campaign received a flurry of attention in the fall of 2013  when Albuquerque voters defeated a ban on late-term abortions. The Building Movement Project  went back to talk to five leaders in that Campaign to understand why they won. The Respect ABQ Women report points out the importance of addressing local dynamics that can tear apart coalitions – on reproductive rights and many other issues – including who is at the table and who has the power to make decisions. It’s a story of age, race, and power. It’s also a story of principle and compromise. It’s a story of local power to partner on equal footing with national players.

1. Be Prepared: The people we interviewed addressed internal issues and dynamics before the anti-abortion ballot initiative was introduced. This gave them the skills to work through differences. Difficult conversations are inevitable. To start the process of addressing issues such as racism, xenophobia, homophobia and ageism helps groups learn to deal with and work through conflicts when they arise.

2. Decide on Process: It is important to clarify how decisions will made during the campaign at the very start. There is enormous pressure to act quickly; but ignoring process can be costly in the long run. Defining a good decision-making process can balance speed, analysis and an examination of unintended consequences.

3. Set Long-term Goals: Everyone wants a short-term win, but being clear on the long-term goals helps to prevent the tensions that are inevitable when operating in the tense environment of a campaign. It also can help shape the decision-making process. The campaign can strengthen relationships over the long-term, creating a cycle that keeps the groups working together rather than splitting apart.

4. Define National and Local Roles: Larger national groups often have the necessary resources to fight the campaign as well as important relevant experience and information. Local actors have expertise about the community and new ways to look at and frame issues that resonate with the local context. The combination of local and national knowledge is very powerful but it is something that requires practice to balance.

The lessons from Albuquerque can be used to open ourselves up to new ideas and actions that take us into the future, where reproductive justice becomes the norm rather than the exception.

Interview with Zeenia Junkeer: RHEA and the Work of Coalition Building 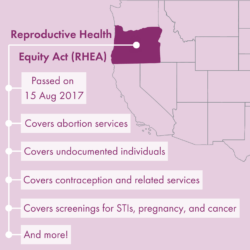