Although I am a gay man and an activist, for most of my career I have opted out of LGBT activism and organizing and instead devoted myself to the racial and economic justice issues that had loomed much larger in my own life. I felt ambivalent about the top policy issues that were the focus of the LGBT movement; not because I ever opposed the idea of marriage, but the issue didn’t speak to my lived experience as a single person. Now that I’m partnered and in my 30s, I have a different appreciation for the recent gains made by the LGBT movement. Being in a long-term relationship connected me to the desire of so many other same sex couples to have our partnerships validated by our shared institutions and traditions. When I elected to extend my health insurance to cover my partner, the tax penalty I saw on my paycheck every two weeks was a reminder that marriage carried real rights and economic benefits that we were barred from accessing. Clearly, my views on the “gay agenda” have evolved, along with the rest of the country, and I was as eager to see the Court strike down DOMA as anyone.

But just when I’m starting to feel more invested in the future of the LGBT movement, I read John Aravosis’ AMERICAblog, in which he takes swipes at LGBT leaders of color who have been heroes of mine (particularly Urvashi Vaid and Kenyon Farrow) because they’ve pushed the movement to be more inclusive of the racial and economic concerns of LGBT people of color. These leaders have reliably raised the fact that anti-gay oppression is compounded by racial biases and economic inequalities that are still with us four decades after the “classical phase” of the Civil Rights Movement. This isn’t a new critique; many LGBT activists of color – and organizations like Southerners on New Ground, Queers for Economic Justice, the Audre Lorde Project, and many others – have asserted that immigrant rights are gay rights, that racial justice needs to be part of the gay agenda, and that same-sex marriage won’t solve the sexual orientation poverty gap. But rather than consider the way that marriage might be just the first crack in the glass ceiling for far too many LGBT people, Aravosis characterizes concerns about the limitations of same sex marriage as just the “demonization of the modern gay rights agenda.” He further inflames the resentment of his readers (I used to consider myself one of them) by claiming that the critiques of the gay agenda go hand in hand with the demonization of gay white men in general, even though the quotes he cites from Urvashi and Kenyon don’t say anything about gay white men at all.

While I can understand why some white LGBT leaders – like Aravosis – might bristle at the suggestion that the standard gay agenda isn’t sufficient for the entire LGBT community, it makes me all the more encouraged that the LGBT organizers and advocates interviewed and surveyed for our new report “At The Crossroads: The Future of the LGBT Movement” think that the movement’s core vision and policy demands have to go beyond marriage. I’m also glad that the people actually leading LGBT organizations have a broader understanding than Aravosis of what it takes for coalitions and alliances to last. He characterizes coalition-building as a transactional ‘I will scratch your back, so that you’ll hopefully scratch mine’ arrangement, whereas many of the LGBT groups we surveyed embraced a broader social justice policy agenda. I believe that the open letter titled “Trayvon Deserves Justice” that was issued by some of our most prominent national LGBT organizations earlier this week was about seeking justice for all people, not just a cynical attempt to repay a favor to the NAACP.

The solidarity over the George Zimmerman verdict is what makes Aravosis’ tantrum seem so tone-deaf. At a time when progressives seem united in their acknowledgment of the persistent problem of racial discrimination, it seems odd that he attacks two LGBT leaders of color for trying to expand the agenda and vision of the LGBT movement to be as multifaceted as the community.

Urvashi is going to be part of our webinar on the future of the LGBT movement this coming Tuesday and will talk about the distinction between lived equality and legal equality (among many other things). It’s a distinction that resonated with me, and will probably connect for others who look at the legal/legislative gains made by previous generations but look around today and experience the limits placed on that “equality” in our daily lives. I hope you’ll register for our webinar to hear more about the report’s findings and hear from Urvashi about what it will really take for the LGBT movement to prepare for a more diverse, inclusive future.

Webinar Recap: At the Crossroads: The Future of the LGBT Movement 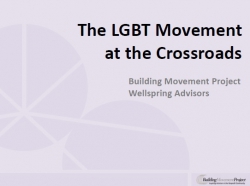 Celebrate Our Demands: Acting in Solidarity with LGBTQ Immigrants Beyond Pride Month